Day de Dada Art Nurses are a troop of nurses, creating methods to help people explore their creative potential or seeing their mental or physical health from another perspective using the roles of medical nurses as caregivers, observers and teachers and culling from modern and alternative medical procedures.
The art nurses spent the first week of June 2018 performing in farmers markets throughout Boston, sponsored by the Mobius Artists Group.
Nurses included Viv de Dada diagnosing with her Magic 8 Ball, Barbara Lubliner giving third eye exams, Lydia Grey art divining with vegetables, Farrell Mason Brown diagnosing with tarot cards and me, doing various actions. I started the week checking art health by palm reading but soon realized I was having difficult to see palm lines, so changed to an easier action- having people take a breath of the aroma of a rosemary plant that I purchased at the market. Through some research while creating the score book that we used during our Boston performance (see scorebook) I had found a study that claimed that when people smelled rosemary it helped improve memory.

My performance pieces began with "THE ETERNAL KNITTER" for the first Day de Dada festival in2002. The knit piece is now over 100 feet long.
Since then I have been doing other performance for Day de Dada, Inbred Hybrid Collective Shows and Fluxus events.
Day de Dada Performance Art Collective produces events based on concepts of the dada and fluxus movements.
​We present spontaneous and experimental performance art pieces with audience participation and interaction.
For more info visit our website - www.daydedada.com
or view video of performance on YouTube 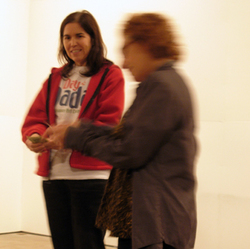 “Dollars de Dada” the opportunity for audience members to get paid to do a performance. Chose a dollar, do the action written on it and keep it as your payment.
Begun in 2008, “Dollars de Dada” has been performed at the Day de Dada Parade in 2009, the Fluxfest performances at Perogi in Brooklyn, NY and Printed Matter, NYC and as part of the Fluxus Performances at "Fluxfest"  in Chicago and "A Book About Death @ Belknap Mill" ​in Laconia NH,  October 29, 2010. 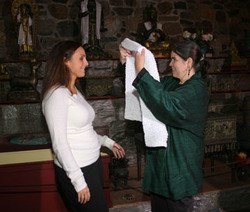 On the afternoon of Sunday, Oct. 15, 2006 I presented the Kata Scarf Project at the Jacques Marchais Museum of Tibetan Art.
Nineteen scarves were knit while meditating on mantras of peace.
At the museum I gave the scarves to random people and presented them in a traditional way.
Kata scarves are part of a Tibetan Buddhist tradition of offering scarves as a blessing. They are usually silk. But i decided to make my own knit version and my interest was in when does a piece of cloth ​become spiritually infused.?